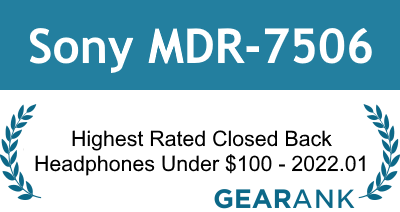 The MDR-7506 first appeared on our recommended list for Closed Back Headphones Under $100 from March 2016 until January 2021. Then in January 2022 it had high enough ratings to go back on the list and we are still recommending it today.

A perennial favorite, the MDR-7506 is a must-have for any studio, large or small.

The MDR-7506 was introduced in 1991 as a "studio" version of the DJ oriented MDR-V6 and quickly became a favorite for studio engineers for their honest sound signature which helps make critical mix decisions easier.

This three decade span is a testament to their timeless sound signature which is well suited to hearing yourself properly while tracking or making critical mixing decisions.

The MDR prefix is an initialism of the Micro Dynamic Receiver trademark. Initially released with Samarium-Cobalt Magnets, Sony changed the spec to Neodymium somewhere along its nearly 30 years of production.

The earcups also swivel outward to enable you to hear your environment or voice better during tracking.

With its clear and critical frequency response, good isolation, portability and price range, it's a good pick for those who want one headphone to do as much as possible.

They may be a bit harsh for casual listening but time has proven that if a mix that sounds good on the 7506 will sound good anywhere. These have been compared to the legendary Yamaha NS-10 studio monitors for this reason.

The inherent honesty and unforgiving nature of these headphones is a necessary tradeoff.

Note: These are currently on our recommended list of The Best Cheap Studio Headphones Under $100.

The Best Cheap Studio Headphones Under $100

The Best Closed-Back Headphones for Recording