Let's get this show on the Rode

Rode Microphones famously pitted this microphone against a Neumann U47 in this video. That prodded me to give it a shot to see if it can get me anywhere near the experience I had with working on tracks recorded with the seemingly magical, German-engineered U47

I am a huge fan of vintage mics. I've been spoiled because I've been in studios with great vintage tube mics and worked with tracks sent to me that were recorded with them. Mixing tracks made with them has always been a good experience especially when they match the singer. One of my favorite experiences was mixing a singer recorded with a great sounding vintage Neumann/Telefunken (it wasn't specified then) U47. The vocals just fit in the mix really well with barely any EQ or processing. The belted notes were rich and not scratchy, while the lower notes had a lot of clarity without overloading with proximity effect. 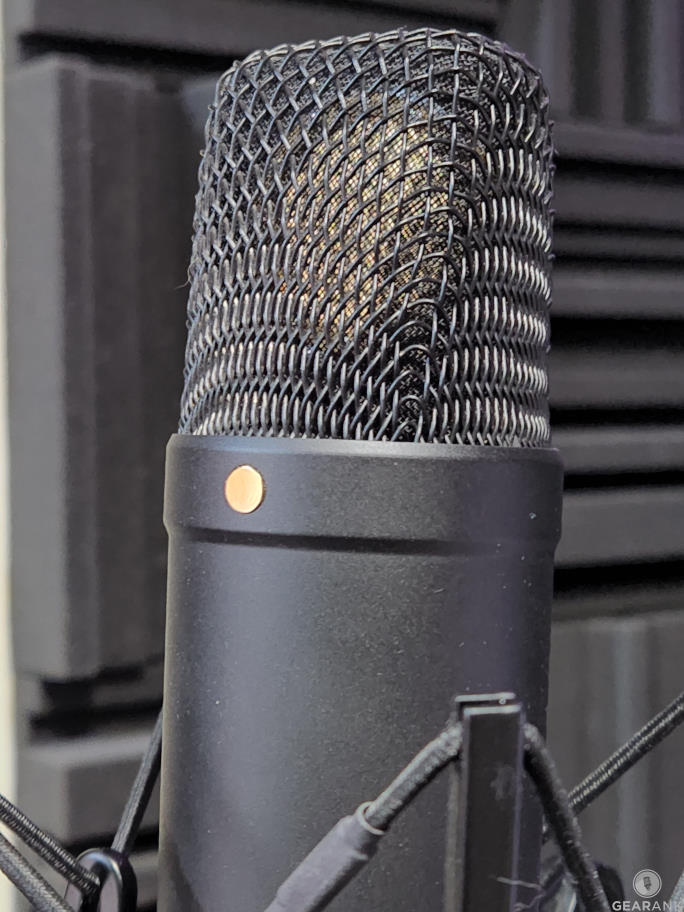 The "HF6", an edge-terminated 1" gold sputtered capsule, sits inside Rode's signature headbasket design. It's not visible but the capsule is mounted with a Rycote internal shockmount system that does a good job at minimizing vibration transfer.

Such experiences are mostly out of reach of most engineers. I was fortunate enough to do so at the cost of me being spoiled chasing those tones with gear that doesn't cost thousands of dollars. Since then I began an obsession of finding near-equivalents of these legendary pieces of gear that are within reach of most of us. My journey to find something that could lean even a little bit towards the U47 direction brought me to the Rode NT1.

The current black incarnation of the Rode NT1 was released in 2017. This was long after Rode released their 10th Anniversary model the Silver Rode NT1-A (The "A" standing for "Anniversary") and original gloss White Rode NT1 from the 90s. Confusing nomenclature aside, the current model shares very little with the previous versions with the exception of the headbasket design. Rode designed the black NT1 from the ground up with new circuitry and capsule, new enclosure and new sound.

As I mentioned in the subheader, they promoted the NT1 as having a warmer, more vintage sound by comparing it with a U47 that was formerly owned by the band INXS. 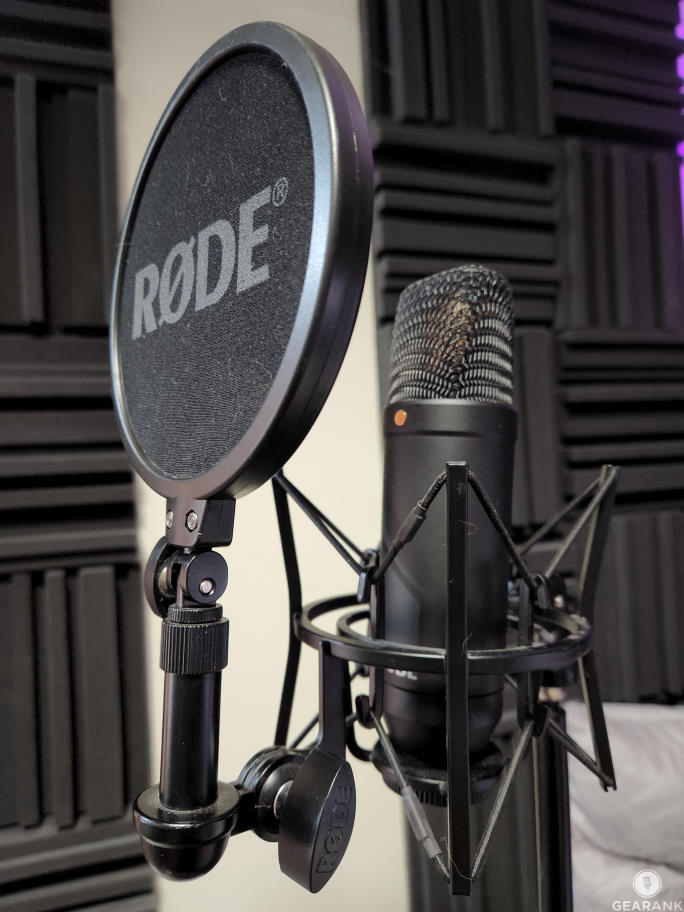 The heavy-duty metal shockmount and integrated pop filter are included in this version of the kit.

My first impression of the mic was great. Depending on the package you get, some stores offer the Rycote Lyre-style shockmount with a paddle-like metal pop filter, while others carry a more traditional metal shockmount with elastic bands plus a fabric pop filter. Regardless of the paired accessories, the mic is the same in either. I had the one with the metal shockmount which was built solidly.

Moving onto the mic itself, the finish feels great to the touch. It has a high quality matte black finish with the logo, serial number and other details laser etched on the body. The edge terminated capsule is visible through the headbasket. The one on mine came slightly misaligned but it was only a matter of unscrewing the endcap and realigning the capsule and closing it. Not really a problem for me but it might be for some that are particular with how their products come out of the box. 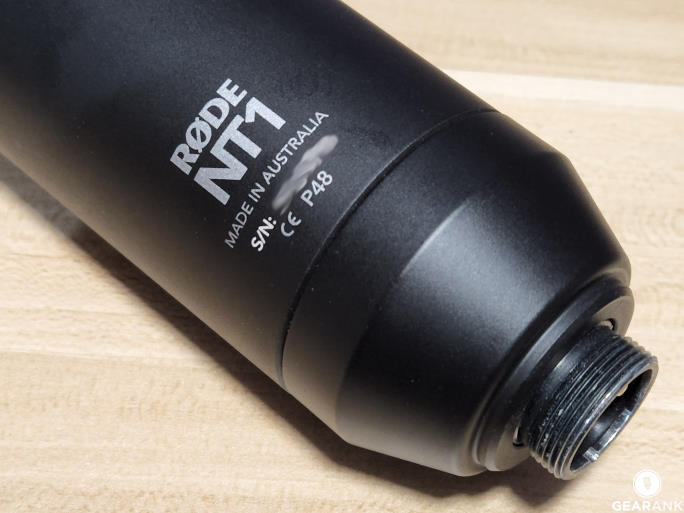 The Rode NT1 is made in Australia with high quality components and are housed inside a 6061 Aluminum enclosure with the details laser etched. (S/N blurred for privacy)

Plugging it in and firing up the phantom power, I got to do a preliminary mic test with the peaks hitting around -10dbfs. I have to say that I was initially underwhelmed. But this is only because I've grown so accustomed to modern sounding mics like the Aston Origin and Lewitt LCT 440 pure that moving to a vintage tuned mic made me aware of my instinct for instant gratification.

Consider the NT1's sound as more of a blank canvas rather than an already finished painting and things will suddenly fall into place. One feature to support this is the NT1's extremely low self-noise. This enables the use of heavy tone shaping without bringing up the mic's inherent noise floor (not counting environmental noise of course). Recording in a well-treated room and you will be rewarded with a recording that can take a lot of processing and still sound good. 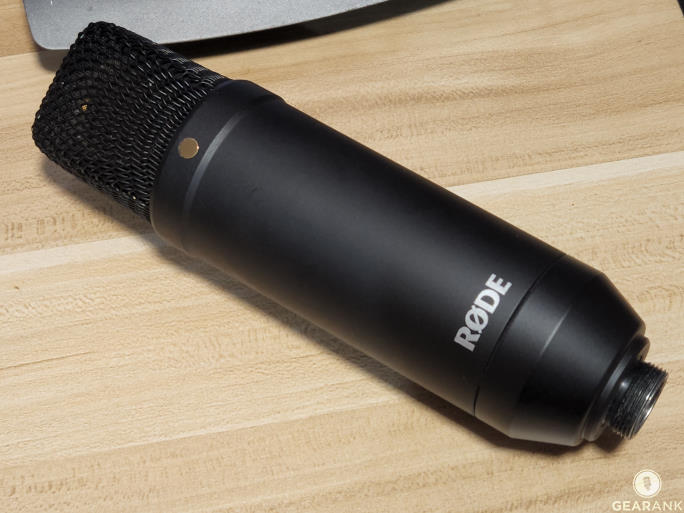 The NT1 only shares the headbasket shape with its predecessors. Everything else has been updated in this version.

In essence, the sound reminds me more of the successor to the Neumann U47, the U67. The U67 has less of the midrange harmonics of its predecessor (which honestly can get very cluttered with louder singers) with a slight bump at the high frequencies to help in intelligibility. Like the U67, the Rode NT1 has a natural sounding low frequency range in contrast to the U47's more prominent bass especially with proximity effect in play.

Frequency response is only one side of the story though. The Neumann mics I've been comparing the NT1 to are still tube microphones and have different "feels" especially with how and when saturation happens in the dynamic range. It would be more accurate for me to say that the NT1 aims for the "vibe" of these vintage mics. They just aren't the same, but kudos to Rode for enabling even the most frugal audio engineers have a taste of what it's like to record with vintage greats.

On other aspects, handling noise was actually very minimal. The capsule is internally shockmounted with a Rycote cradle. I use the NT1 for streaming and voice overs and moving the mic around while I do so doesn't result in overbearing thumps and thuds.

With all this praise, I have to note that I have a few caveats with the kit. The shockmount is solidly built but very heavy. The fabric mesh pop filter is built into the shockmount and it adds to the weight. Unless you're using a straight mic stand, you will need a heavy duty boom mic arm to carry the weight of the mic kit. Rode offers a direct mounting solution in the form of the Rode RM2 ring mount. This is my preferred setup when using the NT1 for voice overs. 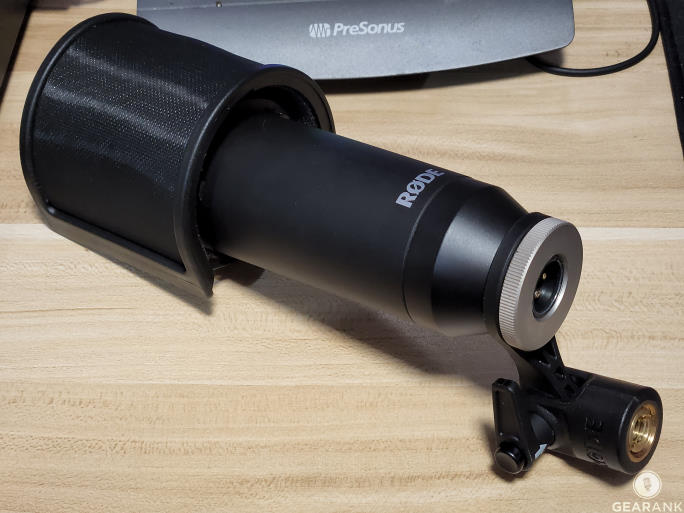 Here is how I have my NT1 set up for voice overs. I use a Rode RM2 ring mount with a generic "shield" type pop filter that is attached to the headbasket. Youtuber Pewdiepie used this setup several years ago before he switched to his AKG C414 and eventually his Electro-Voice RE320.

The mic's sound isn't for all voices and mixes. While it excels in natural sounding captures, those looking for a mic with a slight upper frequency sheen should look elsewhere like the Lewitt LCT 440 Pure.

Lastly, the mic just comes in cardioid only pickup pattern with no pads or filters. This limits its versatility especially with loud sound sources. The tonality is useful enough for most cases, however.

Voiceover* and Acoustic Guitar examples recorded with the Rode NT1

The Rode NT1 is a great mic for vintage tones without the vintage price. The bundled accessories make it great for startup studios and home producers.

While the lack of any other pad and polar pattern options limit its versatility, its tonality is enough for it to be useful for a wide array of voices and instruments.

The Best Studio Mics For Vocals