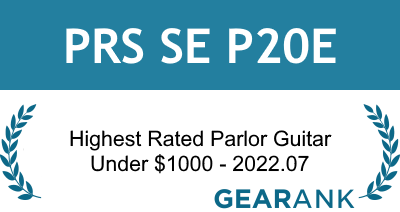 The PRS SE P20E appeared on our recommended list for Parlor Guitars Under $1000 when we published the first edition in September 2021 and it has been on that list in the top ranked position for every edition we've published.

As expected from PRS, owners are bedazzled by the SE P20E's craftsmanship.

In addition to eye candy and solid build, users are pleased at how well the neck and strings are setup, which some describe as far better than their previous instruments.

Tone is another important factor in reviews, described as mellow yet detailed, and very endearing especially to experienced musicians.

Even Art Thompson of Guitar Player magazine is pleased, concluding his review with this: "I’m sold on the Tonare Parlor SE P20E. This is a great-sounding guitar with a price/performance ratio that is off the hook."