Hybrid products have always been a part of audio engineering gear since the development of the mixing console. Channel strips that combined multiple pieces of gear in a modular fashion was one of the earliest innovations in the field. Most gear these days remain unchanged since their inception with the exception of the rise of audio interfaces, MIDI controllers and DAW controllers.

I've been looking at a new interface ever since I felt that the preamps on my Focusrite 18i20 were not doing my new microphones justice. Not that they're bad preamps but I felt that I've hit the ceiling of the kind of sound I could get with the gear I had. I've also been interested in exploring hardware DAW controllers in the past and got interested in items like the Presonus Faderport. 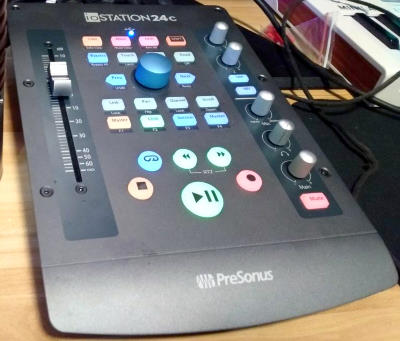 Because of my current workflow of using analog summing emulator plugins like Waves NLS and Brainworx BX_Console, I've been wanting a more "hands-on" approach to my mixing. At first I considered getting analog summing mixers but found they would be limiting. I was completely satisfied with the plugin emulations. So I decided to shop for a new interface and a DAW controller.

This is why I was surprised to find that a product like the PreSonus ioSTATION 24c existed. It is a combination of a 2 preamp audio interface and the company's own Faderport. Once I read about it more and found that the XMAX preamps were getting a lot of praise from users, I knew I had to get it.

The layout is similar to the Faderport with the addition of two gain knobs, a line button, phantom power button, a direct monitor mix, headphone volume, main volume and a mute button for the main out for quick swaps to headphone monitoring.

The Faderport side has a motorized fader, individual buttons for solo, mute, arm, a multi function knob and more. A transport control cluster rounds out the front face of the ioSTATION 24c.

The I/O section is placed in the rear with two combo XLR/TRS inputs for the XMAX preamps, Main L/R outs, Headphone Out, Power Button and USB connection.

Comparing PreSonus ioSTATION 24c to Focusrite 18i20 on Electric Guitar 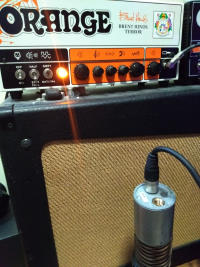 I recorded 2 sets of sound samples using the two interfaces. Each sound sample consists of an Orange Amplifier with a Laney Cab, miked up with an Aston Origin condenser microphone at the same position and settings.

For the miked samples, clean channel and drive channel tracks were recorded.

For the D.I. tracks, only direct clean tones were recorded.

I chose to record guitar because it offers a better sense of how the frequency response differs between the two interfaces as well as providing a point of comparison for line level signals.

For the miked up distorted tones, the ioSTATION has a noticeably more neutral sound with the preamps. The Focusrite 18i20 in comparison has more upper midrange sizzle that may not be to the taste of some as these frequencies are usually EQ'd out to make room for vocals. The ioSTATION also has more low midrange and low frequency extension compared to the Focusrite 18i20, making it better for capturing the full range of a low-heavy guitar or bass cab.

For the clean tones, the difference in dynamics and harmonic complexity becomes evident as the ioSTATION 24c preserves more of the attack and chime of the clean tone versus the Focusrite, which sounds more compressed by comparison. With clean tones, the midrange becomes the focus and since the Focusrite has more of that upper midrange bump, the mids on it sound more cluttered and a bit more smeared. The ioSTATION 24c handles the mids and low-mids with more nuance and clarity.

The D.I. tracks are where the difference in their converters becomes most noticeable with the Focusrite sounding more mid and upper-mid focused with a steep dropoff at higher frequencies. The Presonus ioSTATION 24c preserves more high and low end. This is odd to me since the Focusrite has more upper frequency bite on the miked up tracks. Needless to say, if you're looking to record pristine line in sound sources like keyboard or synths, the ioSTATION 24c will preserve the highs and lows better than the line-in sound of the Focusrite.

One of my favorite things about the ioSTATION 24c is how fast it integrated with my DAW of choice: Reaper. While it has preset mapping for major DAWs like Studio One, Cubase, Ableton Live and ProTools, I was worried that it might not support Reaper fully. While most of the features like marker skipping are unavailable for Reaper, the motorized fader, transport, solo, mute and arm are all I needed to experience a faster workflow .

The XMAX preamps did not disappoint. Compared to my old Focusrite, the XMAX preamps have a more "open" sound out with better high and low frequency extension. With higher gain settings and running the mic preamps hot, some subtle saturation and compression comes in that just adds a bit of harmonics without it sounding distorted. The Focusrite tends to impart a "boxy" midrange on some voices and D.I. sources. While characterful, I prefer a preamp like the XMAX with subtler coloration. It has great clean headroom and adds a subtle sheen on vocals.

The transport controls were responsive to my DAW and punching in recordings felt faster. At this point, any marginal improvement to my workflow is a major improvement to my overall production so the ioSTATION 24c wins my vote in that regard.

One con that I noticed immediately was how the interface would go on a sort of "sleep mode" when no sound from my computer is playing. When a sound is played, there is a delay followed by a "pop" which feels like the interface "wakes up" from standby. I have yet to see how to resolve this and if someone could point me to solutions, feel free to write in the comments below.

Another con that I chose to overlook is the limited functionality of the unit with the DAW I use (Reaper). Other Major DAWs can make better use of the ioSTATION 24c's functionality.

The ioSTATION 24c felt like a definite upgrade in terms of sound, workflow and overall production value for me. It helped me get that last marginal improvements and optimizations in my workflow by allowing me to get hands on with my music production. I can close my eyes and rely on my ears and touch riding a fader to balance tracks; something that was near impossible to do with just a mouse and keyboard. I highly recommend this for project studios looking to get into the more tactile side of audio engineering.

There are no direct competitors just yet, however you could get the PreSonus Studio 24c which is essentially the same interface but without the DAW controller which makes it quite a bit cheaper.

Some of the other recording gear I use in my studio includes the Focusrite Scarlett 18i20, Focusrite Scarlett Solo, Samson QH4 Headphone Amp and Cloudlifter CL-1. My mics include Aston Origin, Aston Element, Shure SM57, Rode NT1, Rode PodMic and MXL V67G.

The Best Audio Interfaces - All Prices